BlogVisit Stronsay in the Wintertime

Editor’s note: As a way of encouraging Stronsay residents to put themselves in the shoes of tourists visiting Stronsay, to suggest ideas for tourists who might wonder about an off-season visit, and to generate new material for the site, the Visit Stronsay Group held a competition in which locals were asked to imagine what they would do if they visited Stronsay in the wintertime. Roger Neville-Smith was the competition winner, and 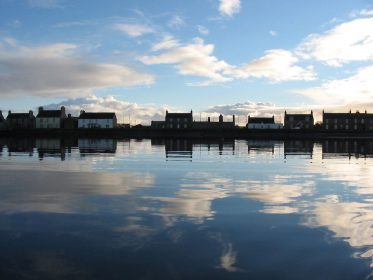 his post (in the form of a letter written by a visiting friend) and photos are presented here:

Roger writes: I have received this letter from my imaginary friend Ralph . . .

Dear Roger, I’ve just  got home after a lovely break in Stronsay, which you recommended. I hesitated when thinking of a winter break, but was so pleased that I went ahead with the plans.

I decided to travel by ferry to witness the passage from Mainland Orkney to Stronsay. The myriad of  little islands we passed were fascinating, as was the circuitous route to the harbour at Whitehall. Travelling on a budget, I had booked to stay at the Fishmart Hostel, which is in the heart of the village. Although self-catering, I took advantage a few times of the adjoining  cafe. Electric bikes were available for hire for free, and this was a great way to see the island.

Stronsay is rightly famous for its extensive sandy beaches: Mill Bay, Rothiesholm Bay and St Catherine’s Bay are easily accessed by road. If we had had more time and better footwear there were lots of other beaches off the beaten track. Sea birds always accompanied our trips, and usually a seal would pop up to check us out.

I chose three of the numerous businesses to see and enclose a few photos as a memo. Marion Miller Jewellery, based in the south of the island, was available after I checked with her on the phone. Seeing the artist at work up close was fascinating.

The Book Nook, based in a wooden outbuilding, is packed with books. Vicki is very knowledgeable, and I got the impression she had read most of the books. Books were for loan or sale, and a

mystery-wrapped book was given to complete the trip.

To the southeast, is Airy Fairy, run by the seamstress Hazel Shearer. Here, there was a very friendly welcome, including a cup of tea, which we deserved after the bike ride. The showroom is beautiful, demonstrating the range of children’s dresses, quilts, etc. that she  makes.

I want to see more, relax more and just be in Stronsay again.