There are so many great things to do outdoors in Stronsay,  so many things to discover on land and sea. Your visit to the island can provide the opportunity to try a favorite pasttime in a whole new setting or to try something totally new to you. Go wild! 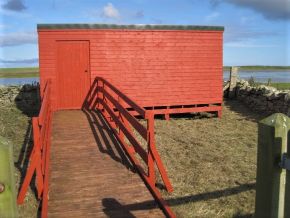 Seals can be spotted all around the shores of Stronsay. Don’t be surprised if you look up to find that you are being watched — and followed — as you make your way along the shoreline. The Ayre of the Myers, just a short beyond the village, is a great place to catch seals sunbathing on the stones at low tide or bobbing up and down in the water. The newly renovated seal hide on Holland Farm gets you out of the weather and provides camouflage to watch the seals as they loll about on the beach below or frolic in the water. In late October and November, little white balls of fur begin appearing along the north-west coast, and  Linga Holm, just across the water, is filled with mother seals and their pups. You are welcome to take a look and a photograph or two — but take care not to disturb the seals, as babies can get crushed when the mothers take to the sea in a panic. And the mothers move much more quickly than they seem capable of and those little cute balls of fur with the big sad eyes turn into hissing, biting furies if you get too close . . . 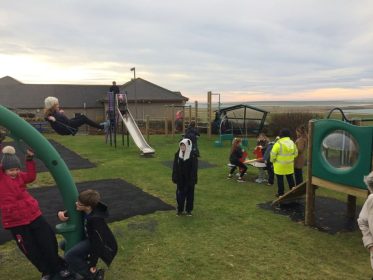 Stronsay is made for children! Everywhere you look, there is somewhere different to play, different games to try, skills to hone, treasures to find. There are two play parks designed for children of all ages — one in the village and one in the middle of the island, between the school and the community centre. But the long sandy beaches are perfect places for running, turning cartwheels, paddling, rock pooling, sand castle building, pretending or just sitting and watching nature happen all around you. Ebenezer Stores has child-sized bikes that can be borrowed (at no cost) for the day so that you can tour the island as a family. Most island events welcome children, and often there are events put on just for children. To see if there is something your children might enjoy while you visit the island, please check the Events Calendar. 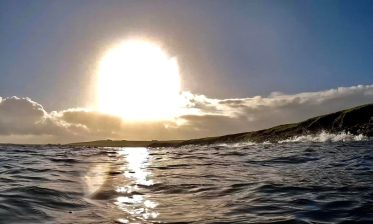 During your visit to Stronsay, why not take the plunge and give wild swimming a try? The local group of wild swimmers, the Stronsay Star Fishes, are trying to swim together weekly in Mill Bay, but other individuals have swum from the harbour to the lower station in Papa Sound. They swear by the many benefits of taking a dip in the cold waters around Stronsay, but they do recommend a wet suit, especially if you’re not used to it. On relatively warm days, especially during the summer holidays, you can also find Stronsay youth jumping off the pier into the harbour, doing a bit of wild swimming in their own style. Local wild swimmers want to remind visitors that it is always a good idea to take along a swimming buddy, and they warn that there are many areas, especially around the south-eastern coast of Stronsay, that are affected by strong tides and swell — but there are plenty of relatively safe and shallow places to experience the exhilaration of an icy dip. 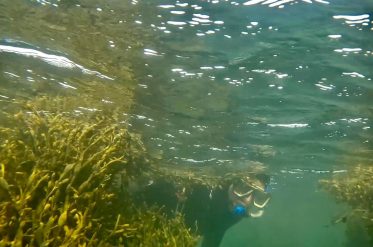 The crystal clear waters surrounding Stronsay’s coastline provide many opportunies for snorkelling or diving if you’ve got the proper equipment and experience. The photo here was taken by local snorkeller Bill Hodgson of an adventure through the kelp beds in the Ayre of the Myers. He extols the beauty and abundance of the wildlife and fantastic colours of the plants that can be found below the surface of the waters. For more inspiration, take a look at a beautiful video produced by the North Isles Landscape Partnership of a dive in Stronsay’s Bay of Franks. 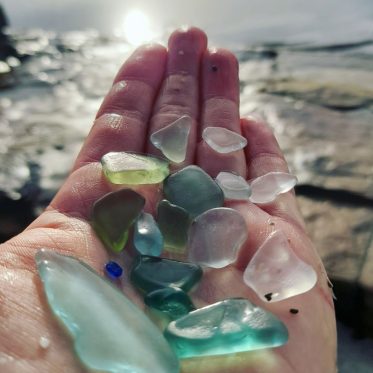 You never know what you’ll find when you meander down one of Stronsay’s many lovely beaches. Different parts of the island offer different finds. The grotty-buckie (cowrie), which is meant to bring you luck, can be found in many places, but the rare canoe shell can only be found along the Bu Sands (for more information about shells and where to find them, open the Stronsay walks brochure here). The nickname for inhabitants of Stronsay is ‘Limpets’, though the reason for this is shrouded in the mists of time; nevertheless, limpet shells in a variety of beautiful colours, from fiery orange to steel grey, can be found in abundance along the shores, as can the many-coloured periwinkle shells. How many different colours and patterns can you find? Sea glass and well-worn pottery shards are also scattered along the tide line or trapped in crevices among the pebbles. And what a beautiful array of beach pebbles are to be found and admired. Maybe you’ll be lucky enough to find a fossil imprinted in the sandstones. If you’re interested in shells and want to see what others have found and identified in Orkney, visit the Orkney Shells Facebook page. 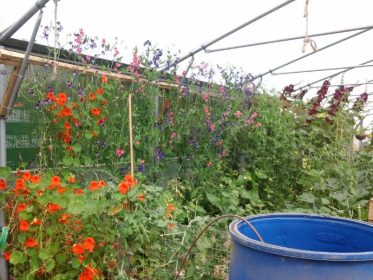 If you want an unusual place to rest or picnic, especially on a rainy day, the community greenhouse has a large picnic table available for visitors and locals alike. All year round, there is something growing in the greenhouse. In the summer, it is particularly lush and full of flowers and vegetables. The strawberry- scented air is wonderful to breathe in and the rich earth, green plants and humidity create a very different atmosphere from the bracing salt air outside. The greenhouse was a project of the Stronsay Development Trust and is basically an indoor allotment which allows locals to rent indoor space for growing things that would not survive outside in Stronsay.

For a fun, free activity that will take you to some of Stronsay’s more interesting places, why not try 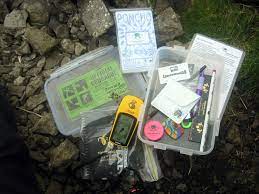 geocaching? Geocaching, for those not already addicted, is a kind of worldwide treasure hunt using GPS to locate hidden objects (caches) that have been marked by coordinates. When you find the secret stash, you will usually find a log book to sign with your own secret identity, and sometimes you can swap objects or add one of your own, depending on the size of the cache.  Geocaching.com lists at least nine Stronsay sites. If you have not already signed up to the site, it’s very easy to do, and you can keep track of all the sites you have discovered on Stronsay and beyond. Happy hunting! 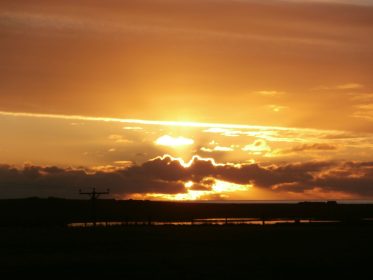 The sky domes big and wide over Stronsay.  Spectacular sunsets happen regularly, as do magnificent rainbows (one of the benefits of rainy days). And the clouds are ever-changing. You can see rain and snow coming toward you for miles, and the tall, puffy cumulous clouds tower overhead, stark white against the bluest blue. From the end of May to the end of July, the sky never grows truly dark, as the sun simply slips slightly below the horizon before starting the new day all over again.

In other words, it’s only if you travel to Stronsay in the autumn and winter months that you’ll get to fully enjoy the spectacular night sky. The skies are truly dark, and you don’t need much of an imagination to see how the Milky Way got its name. The number of stars in the sky is truly breathtaking, and your place in the universe is simultaneously diminished and exalted.

If you are truly lucky, all things will conspire to create the perfect night to view the Merry Dancers (the aurora borealis). The clouds scud away, and the sky begins to glow green just above the northern horizon. You don’t need a fancy camera — even your phone will work — but it needs to be set to night mode. With the help of a camera, the faint green glow becomes transformed into a range of magical colours. It is rare for those who are viewing the Merry Dancers without the aid of a 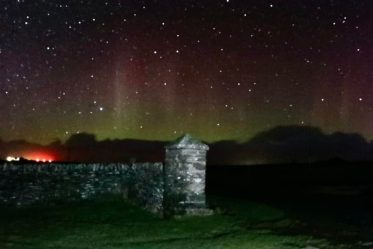 camera to see much beyond the glow, but on certain occasions, the ghostly strands do truly dance and waver across the sky, often in colours other than green — and that is an experience that is hard to describe and leaves you wanting more.

To see what’s happening in the skies above Orkney, local aurora watchers recommend the Glendale app,  Spaceweatherlive or Aurora Watch. The Orkney Aurora Facebook group is a great local source of information about the night skies above the county. 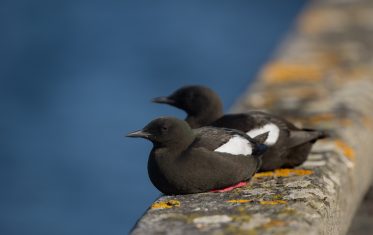 Often, Stronsay is so still that you can hear the whisper of birds’ wings as they swoop overhead. Sometimes, especially in the springtime or on a long, light summer evening, the cacophany of hundreds of birds calling and chattering makes you wonder why some say the countryside is too quiet!

Birds can be found everywhere in Stronsay — from the humble but cheerful sparrow hopping about the ground and the pipits and wagtails teasing and flitting just out of reach, to fierce but graceful hen harriers and short-eared owls scanning the fields for their tea. The sweet song of the skylark and the unforgettable sounds of the lapwings, curlews and snipes fill the air above the green fields, and the swooping choreographed dances of the starlings as they come in to roost in hedges and byres never cease to amaze.

Pairs of swans and their young float on the lochs or shallow bays, and terns scream at you from not very far above your head when you dare to walk on their beach. Black-headed gulls and fulmars swoop overhead while shags and cormorants, razorbills and guillemots cling to the cliffs — where they are often joined by the ever-popular puffins. Puffins settle on the cliffs on Burgh Head during the summer months and are best seen in the late afternoon and evening when they come in to roost. 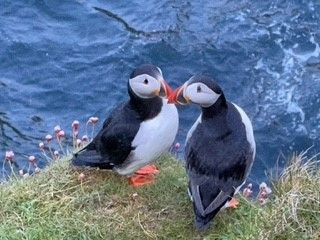 Of course, the little black and white guillemots can be found much closer to civilization, nesting in the pier and posing for photos as you wait for the ferry.

Stronsay is a fantastic place to watch birds, whether you are just a casual observer or a true twitcher. A bird hide can be found near the Lea Shun in the south-east end of the island for those who would like a place to perch out of the weather.

Through the decades, the Holloways at the privately owned Stronsay Bird Reserve have spotted and documented many rare migrants, such as the American Golden Plover, Arctic Redpoll, Scarlet Rosefinch and Tawny Pipit.  John Holloway’s Stronsay Bird Reports can be found in the Heritage Centre, and his other books are available at the Orcadian Bookshop in Kirkwall. 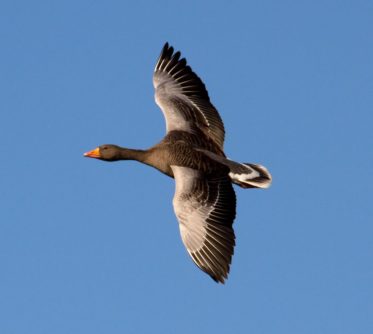 It takes no patient waiting or any particular skill, however, to spot the ubiquitous greylag geese, who have made Stronsay their year-long home and continue to grow in number, often to the detriment of other species. Because there are so many of them, with no real predators to keep the population in check, and because they are highly destructive of farmers’ crops and grasslands, the geese are not the most popular bird in the place (to put it mildly), so don’t be surprised if many of the locals are less enthusiastic than you upon seeing the Vs of geese rise and circle in the evening sunset glow.