The Mystery of the Stronsay Beast 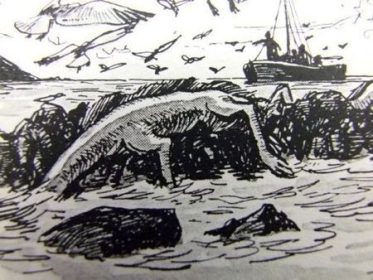 One of the exciting things about a big storm is finding out what the raging sea has brought to the island as a result. In every day and age, Stronsay residents – and undoubtedly many visitors – have gone out in the diminishing winds and rain to scour the shoreline and discover what unusual things have washed up. One particular find in late September 1808, however, has gone down in history and lodged in the imagination, not only of the islanders but also of others far and wide. Try as scientists might – and many have indeed tried – they have not quite been able to completely dispel the cloak of mystery that persists to this day.

As the story goes, a fisherman (well-versed in the species of fish and cetaceans to be found on his patch) was attracted by a flock of screaming birds hovering around a strange shape draped across a skerry at the end of Rothiesholm Head on the morning after a large storm, and he went to have a good look for himself. However, because it was inaccessible by boat, closer examination was only made possible when another storm, ten days later, forced the carcass onto the shore. A little group of Stronsay men gathered around and tried to puzzle it out, but even with generations of experience at sea behind them, explanation eluded them. The animal before them was over fifty-five feet long – the neck itself was over

ten feet long. The head reminded them of a cross between a sheep and a seal. The skin was grey, and if you rubbed it one way, it was smooth as velvet, but if you rubbed in the other way, it was rough and rubbery. The beast had what appeared to be six legs and a long, bristly mane (it was said that the bristles glowed eerily). Even in those days before Facebook and WhatsApp – let alone phones of any kind – word somehow spread like a wildfire across the globe, and it wasn’t long before the island was swarming with visitors from all parts of the country. Some came to gawp and to marvel; others arrived to debunk the story. By believer and sceptic alike, the creature came to be known as the Stronsay Beast. 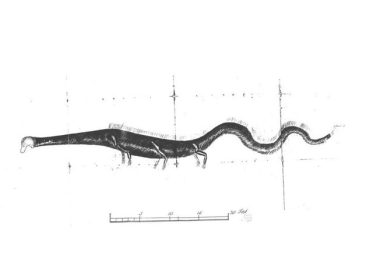 Bits of the beast were preserved and carried away to the hallowed halls of Edinburgh where the best scientists of the day performed experiments to determine what sort of beast it was. By means of comparison, many concluded that the beast was merely a basking shark that had decomposed in such a way that it was difficult to see its original form. Though later scientists would suggest that is was an oar fish, even that didn’t quite ring true. In 2007, PhD candidate, Yvonne Simpson, decided she was going to use the latest technology to solve the mystery once and for all. She would ask for permission to take a sample from the preserved 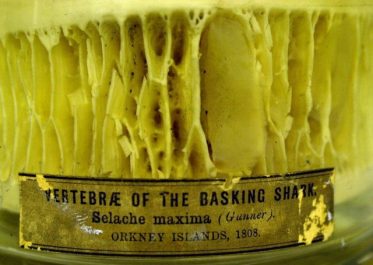 specimens that had sat in jars on the shelves of the Natural History Museum in Edinburgh for the past two hundred years and would look for a lab that would conduct a DNA test on them to determine whether it was some kind of shark. As Yvonne Simpson explains on her own website dedicated to the project, she found a lab in Florida that would conduct the test, but it seems that neither the National Library nor the National Museum, both of which were meant to have samples of the beast, was willing to provide a sample (or could not find them, as is the case of the skin sample once held by the Orkney Museum). So, the DNA mystery is yet to be solved.

The story made the papers in 2008 (to view the story in the Telegraph, click here).

The mystery continues — and, naturally, continues to foster speculation. (There are some interesting video presentations about this, one by the History Channel and one by Curious World–take a look.)  Was the Stronsay Beast the last megaladon? A pleisiosaur, perhaps a relative of the Loch Ness Monster? Or just a basking shark? Even so, no basking shark fifty-five feet long has never been found. Perhaps it was a different kind of shark, then? Perhaps it was nothing of the kind.

Given a lack of concrete evidence, many still hold to the idea that a rare, as-yet-unidentified sea monster (a globster) had found its way to the Stronsay beach on the night of the storm.

Want to have a look at the discovery site? You’ll need to walk along the top of Rothiesholm Head to look down to the site where it washed ashore and out over the skerry.

The Legend of the Well of Kildinguie

As this site is hoping to prove, there are many good reasons to visit Stronsay, and in the 1400s, Stronsay 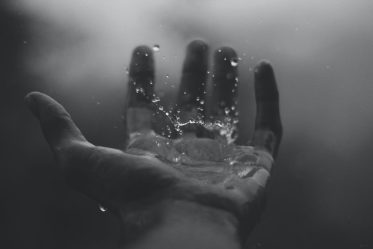 was a popular health tourism site. People from Norway and Denmark to ‘take the waters’. As a popular saying of the day went: ‘The well of Kildinguie and the dulse of Guyiden can cure all maladies except black death.’ Apparently, if the waters of the well, located about three-quarters of a mile south of the village of Whitehall on the edge of Mill Bay, were swallowed with a handful of red dulse (seaweed), found a bit further along Mill Bay, anything could be cured.

Several hundred years later, the Reverend John Anderson, minister of Stronsay and Eday, thought it would be a grand plan to revive tourism by bringing the healing powers of the waters to the world’s attention again. In the Statistical Account of 1795-1798, he couldn’t say enough about the water: ‘clear as crystal, not unpleasant, is full of fixed air, as may be easily discovered by any who drink some glasses of it: for they will soon find themselves affected in the same way, as if they had drank some find bottled small beer.’ Rev Anderson explained how the cure should be approached: ‘First drink the water at Kildinguie, then proceed by foot over about two miles of level land to a place called Guyiden or Odin Geo, which is near the Vat of Kirbuster.’ That’s where the bright red dulse could be found that should be eaten. Rev Anderson thought that a building near the site of the well, probably the remains of a chapel from the earlier days of pilgrimage to the well, could be renovated to serve the tourists who were bound to return to Stronsay.

In The Folklore of Orkney and Shetland, Ernest Marwick relates, ‘A few years ago, an elderly gentleman from Germany suffering from Parkinson’s disease, after vainly consulting specialists in three of the world’s capital cities, made a pilgrimage to Stronsay and carried away numerous bottles of Kildinguie water and a quantity of dulse.’ Unfortunately, he fails to tell the reader whether the cure worked or not!

To see archaeological notes on the chapel site, click here. Although quarrying in the late 1800s reduced the water to a trickle, if you know where to look, it is still to be found.

The Legend of Scota Bess and the Mermaid’s Chair 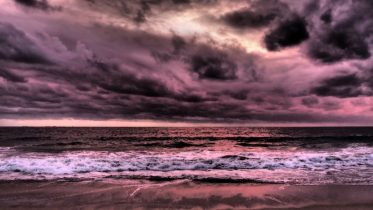 The Mermaid’s Chair in Stronsay got its name from the beautiful mermaids who were said to sit there luring the fishermen with their irresistably beautiful singing. However, the rock formation along the coast of Mill Bay (not far from the Well of Kildinguie) is more renown as  the place where Scota Bess, thought to be a witch, would sit and order up storms, instilling fear in the hearts of the island folk. After a period of non-stop January storms, during which no fishing could be done, the Stronsay folk decided they’d had enough. They drove her away from her chair on the shore and beat her to death in the barn at Huip. But then their consciences got the better of them, and they buried her body in the cemetery — buried it deep, mind you. But when someone went to check the next morning, there was her body lying on the surface! Full of fear and foreboding, a group of men took her body and flung it into the Meikle Water. Though her body was never seen again, a mound of earth grew up in the loch and became a nesting spot for swans — a sign that the poor woman was at last resting in peace? Or is Scota Bess just quietly waiting for her chance to revenge her death?

On the farm of Huip at the north end of the island, a green hillock was believed to be the dwelling place of peedie trows and a number of small mounds or hillocks were considered off-limits because of the eerie atmosphere around them.  The mound near the Bu, called Hilla-roo housed a winged white horse that would swoop down on visitors out too late and was said to carry off young children. Visitors, consider yourselves warned — beware when you approach one of the many cairns, mounds or hillocks, for you never know quite what you might disturb!

Not only peedie folk, but giants also used to roam Stronsay’s fields. Near the Straenia water in the far regions of Rothiesholm, down near the beach, are two groups of enormous stones. How did they come to be there? Giants, of course. The most famous giant in these parts is called Cubbie, and he is thought to have thrown the stones by Straenia water in a fit of temper (though, allegedly, Cubbie himself said that he’d accidentally dropped them when trying to build a causeway between Stronsay and Shapinsay). The stones are referred to as Cubbie Roo’s Laid. Cubbie is also credited with building what is known as the Dane’s Pier near Housebay (some, however, say it was the Picts; some say it was the Vikings; and some say it was the sea itself that did it). In the late 1700s, the Reverend John Anderson reported that a grave in Auskerry ‘contained bones of an enormous size and afforded convincing proof that the body buried there was well over eight feet.’ And if such a fine and upstanding member of the community, if a minister says it, well then, it’s bound to be true!