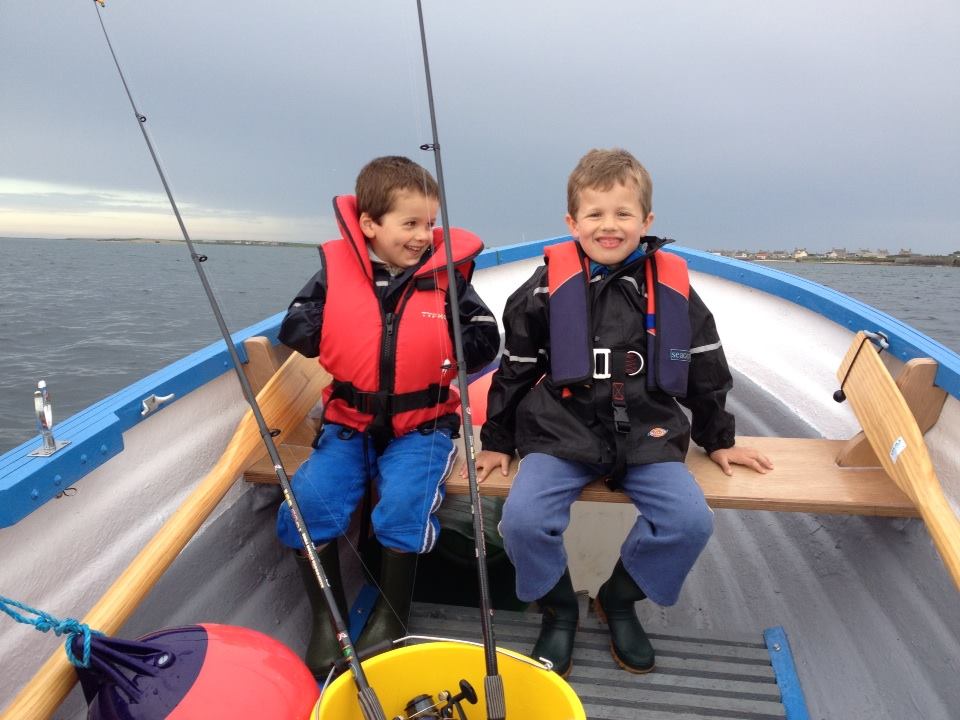 “During the 5 years that we have lived here, our boys have grown and developed into confident and secure little people … We have no regrets at making this beautiful island paradise our new and forever home.”

In June 2012 I responded to an advertisement for an island community nurse on the island of Stronsay in Orkney. Until then I hadn’t even heard of the place, although I had vaguely heard of Orkney.

Two weeks later I attended for interview and was offered the job. What followed was a hectic few weeks selling and buying houses, cars etc. and packing-up belongings in preparation for our relocation to Orkney. It also meant saying farewell to friends and work colleagues, but we were certain that this move was meant to be, and we embraced it with this same level of enthusiasm.

After a big family party to send us on our way, we moved up to Stronsay at the end of August 2012 and had a week to settle in before I started work and our two small boys started school.

When we arrived here, Dan was 5-and-a-half and Sam was 4. Sam started his school ‘career’ in pre-school (part of the nursery class), and Dan went into Primary year 1. Here on Stronsay, Primary years 1-3 are taught together as Lower Primary and years 4-7 are taught together as Upper Primary. Secondary years 1-4 are taught here, and then at 15/16 years-old, pupils travel to Kirkwall Grammar School (KGS) for 1-2 years to do standard and higher grade examination years. They stay at the school hostel during the week and return home for the weekends on Friday evenings.

Our boys have settled in well at the school and are both very happy there. The school promotes good values and whenever you enter the school the atmosphere is always a happy one.

5 of the teachers and the Head teacher are resident on the island, and other itinerant subject teachers fly in daily as timetabled i.e French, PE, Geography and Music. A large percentage of the pupils play at least one instrument and receive tuition from staff in school time. These include fiddle, trumpet, keyboard and accordion. Stronsay has it’s own band and also the music group ‘Stronsay Silver Darlings’ which to date have recorded and released 4 CD’s.

There is a swimming pool attached to the school and the pupils have regular blocks of PE sessions in the pool. There is also an after school swim club for children of all levels, held weekly in term times. There are public swimming sessions 2-3 x a week are these are usually well attended by children and adults alike.

After a few months to settle in Andy began to find himself some odd jobs around the island, and with word of mouth this soon got him recognised as a reliable and friendly worker and he was rarely without something to do. Then in 2014 he successfully applied for the part time position of island postman, which he really enjoys doing. He also works at Stronsay airfield as ground firecrew and on alternate weeks he helps the island haulier with deliveries. He has also completed his RLSS Lifeguarding qualification and works ad-hoc sessions as lifeguard at the pool. Island life is certainly what you make it; the more you put into it the more you get out.

We are both involved in various groups and committees which makes us feel part of the island and continuing to make it what it is. I am on the Community Council, and also run the Diabetes Support Group 5 x a year. I am a member of the Promoting Stronsay steering group, and was treasurer of the group which raised funds for the new play park. I am an Elder at the Stronsay Kirk and the boys attend the small Sunday club there.

I attend the monthly meetings of the book club and the Stronsay Stitchers group; and also belong to the SWRI which meets monthly from September – May.

In the summer there is nothing better than play time, paddles and a picnic on one of our lovely island beaches, especially with really long daylight hours that we enjoy at that time of year. You can always be assured of the presence of a friendly seal or two watching you from the sea and following you as you walk along the beach. The seals breed here in the Autumn too. In winter and early spring you should get the opportunity to see the ‘Merry Dancers’ (northern lights). Christmas on the island is a really special time with many community events and visits from Santa.

As a family, we have all been involved in the two pantomimes that have been performed since we moved here, Cinderella in 2014 and Dick Whittington in 2016 which we all enjoyed.

Andy is a member of the Hall committee, as well as keeping up to date with all his other roles and responsibilities, all of which keep him busy and happy. He bought a small boat which he renovated and maintains himself, and we use it each summer for short trips around the island. He also enjoys keeping our garden in order.

My main hobby is keeping chickens – which I had never done before we came here. I currently have a flock of about 20, most of which we have hatched and reared ourselves. They keep us comfortably in eggs and it has been good for the boys to be involved in this life cycle process and appreciate where their food comes from.

There are the never ending opportunities for nature walks and wildlife spotting. The walk out to the Vat of Kirbister never fails to amaze anyone with it’s stunning picturesque magnificence. The birdlife here is incredible, from Terns, Fulmars, Shags, Cormorants, Guillemots and Oystercatchers. You may even be lucky enough to find Puffins if you walk out past the Vat towards Burgh Head.

Though Stronsay is a small island, there is always plenty to do.

There are regular events at the Community Halls and these are well supported and enjoyed by the community. These events include games club (children 10-18 held alternate Friday evenings), dance nights, harvest home, BBQ’s, quiz nights, Bonfire night, Halloween, Santa’s visit and  craft fairs (3 times a year).There is also a playgroup held there on a Friday afternoon in term times, and on alternate Monday afternoon’s there is a group also for pre-school children called ‘Peedie Darlings’.

Next to the school is a brand new playpark which was opened in 2016 after over 2 years of busy fundraising; this is a really popular place with the children.

North Isles Sports Day is held every year and hosted on a three yearly cycle between Stronsay, Sanday and Westray. It was in Stronsay in 2015 and due here again in 2018.

Our families and friends have enjoyed visiting us up here and are always fascinated not only by the stunning scenery but also by the atmosphere and community spirit which is evident everywhere. As the island community nurse I am privileged to get to know the population very well and be invited into their homes, and am able to gain their trust and respect in this way. It is a very rewarding job which I am very proud to have the opportunity of doing.

There are places to stay including a hostel, a hotel, self catering and a B&B facility. There are also places to eat including the hotel, Craftship Enterprise Cafe and the Fishmart cafe.

During the 5 years that we have lived here, our boys have grown and developed into confident and secure little people. The community are very protective of the children and it is a very safe environment to bring them up in. Andy and I feel very much part of a lovely, friendly and welcoming community and have no regrets at making this beautiful island paradise our new and forever home.